The Zubeknakov /Zoo-beckNAH-kowf/, is an Epic Ranged Weapon in Unturned 3. It is classified as an assault rifle and it uses Ranger Magazines and Ranger Drums, which hold 35 and 75 rounds respectively. It has the Zubeknakov Iron Sights pre-attached by default. The Zubeknakov takes up 8 (4x2) slots in the Inventory.

Germany: It can be found at Syndicate Locations.

Hawaii: It can be found in unmarked ranger locations.

PEI: The Zubeknakov is found in the bunker on Holman Isle , the airport tower, the lighthouse at Cape Rock, farm sheds, inside Alberton's bank vault, and on Radio Towers.

Russia: It can be found at military locations such as Volk Military Base, Zavod, and Silo 22. It can also be obtained from killing Military Zombies.

Washington: It can be found as drops from Militia Zombies, on the ground at Heritage Valley, at the Submarine and on the Radio Towers all around the map.

The Zubeknakov is a ranged weapon in Classic. It has a damage value of 81, and a range of 400 meters.

The AK47 can be found at crashed helicopters, Farway Airport's crashed airplane, and Skypoint Castle.

The Zubeknakov equipped in hand.

The AKM from Deadzone. 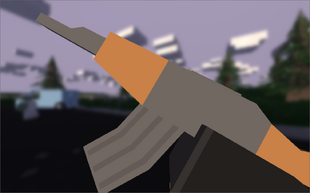 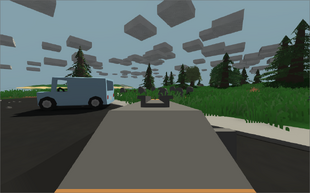 Aiming down sights with the Zubeknakov.

Aiming down sights with the Ak47.
Community content is available under CC-BY-SA unless otherwise noted.
Advertisement