The White Hat is a Cosmetic Hat in Unturned 3.

The White Hat is a unique headwear in Unturned. It is the only unobtainable item in the game, meaning you cannot find them naturally from item spawns.

The White Hat has no in-game function at all, so it behaves just like any other head piece. However in multiplayer, it indicates the White Hat as a hacked item if any player is seen wearing it. This is because there's only one White Hat in the game that has been obtained by one player legitimately, and it cannot be found anywhere else. So any White Hat worn by players in multiplayer is either obtained from inventory editors (hack) or looted from hackers. 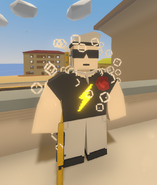