Summerside Military Base is the only other military location in PEI, apart from Confederation Bridge. It has four watch towers (one in each corner), two barracks, a firing range, a helipad, two small armories, and a crashed tank at the back of the base.

A Mega Zombie can spawn at the crashed tank.

Summerside Military Base as seen from the front entrance.

Forest Offroaders at Summerside Military Base.

Shooting Range at a close view.

Shooting Range at a distant view. 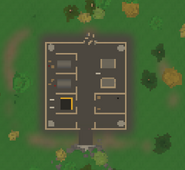