The Spec Ops Rucksack is a Legendary Backpack in Unturned 3. When equipped it gives the player 40 (8x5) slots of storage in their inventory.

Germany: It can be found at Military Locations as a part of the Special spawn-group.

PEI: It can be found at the Summerside Military Base, and Confederation Bridge.

Washington: It can be found at the Olympia Military Base.

The Rucksack was a rare backpack found in military locations and rarely dropped by military zombies. When equipped, it replaced any other backpack that was being used and provided 25 inventory slots and up to 17.5 kg carrying capacity. It also added a 5th hotkey slot. 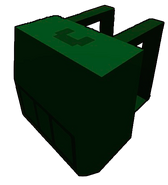