The Saw is a Common Melee Weapon in Unturned 3.

It can be obtained at all Construction Locations and Campgrounds.

The Saw is a Melee Weapon in Classic.

It is found in industrial locations, post offices, and hardware buildings in various towns. It can also be found at several Campgrounds.

The Saw can cut Boards into Sticks and Scrap Metal into Wire. Like the Swiss Knife, it is more of a tool rather than a weapon due to its low damage-per-hit. 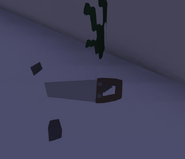 The Handsaw as seen on the ground.

Handsaw as of 3.0
Community content is available under CC-BY-SA unless otherwise noted.
Advertisement