Russia is one of five official maps in Unturned 3 along with PEI, Washington, Yukon, and Germany. It is a large multi-biome survival map based on the country of Russia, primarily focusing on the western portion located in Eastern European. It features locations from three of its European federal districts—Central, Northwest, and Volga—and two Asian federal districts—Ural and Siberia.

There is currently only one variant of Russia that exists: Festive Russia.

It was released on August 19, 2016. The map was developed in collaboration with Justin "Gamez2much" Morton, Mitch "Sketches" Wheaton, Alex "Rainz2much" Stoyanov, and Amanda "Mooki2much" Hubler.

Before the outbreak, Scorpion-7 bought an artifact from builders at Keryev for research overseas. The infection later arrived at the Shereyavo International via a cargo plane and subsequently spread to Moscow despite the efforts of airport security and the Russian military to contain it. The military attempted to launch the nuclear missile from Silo 22 at Moscow to contain the infection but it was sabotaged by a rogue general. Ultimately, the military ended up attempting to collapse tunnel entrances leading out of Russia to contain the spread of infection using the artillery train Ivan but were all wiped out. The Coalition's aircraft carrier Liberator arrived from Germany to the southeast after some time have passed.

There are twenty-four location nodes on the map.

There are also eight unlisted locations on the map. 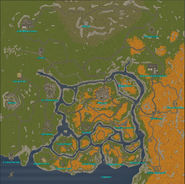 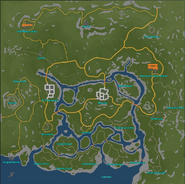 Chart view
Add a photo to this gallery