The Peacemaker is a Rare Ranged Weapon in Unturned 3. It uses Peacemaker Magazines which hold 50 rounds by default. It is classified as a military-grade carbine firearm and appears to be based on the FN P90.

Germany: It spawns at Military Locations.

Hawaii: It can be found at the Alika Base, Mauna Kea, The Ailani, and at the various military checkpoints around the map.

PEI: It is available in Carepackages.

Russia: It can spawn at the American Spy Base, and it is found in Carepackages.

Washington: The Peacemaker spawns rarely at Military Locations, as well as being an uncommon drop from Military Zombies.

The Proninety is a ranged weapon in Classic. It is found at military locations. It uses PDW Magazines, which hold 50 rounds. It has the Point Circle Sight pre-attached by default.

The Proninety is found in 7 locations, all of them being military locations. These locations are; O'Leary Military Base, the green tent and bridge checkpoint in the Confederation Bridge, the helicopter crash in St. Peter's Island, the tent in Montague, some places in Belfast Airport and in the Burywood watchtower.

The Proninety in the inventory.

The Proninety with a suppressor, vertical grip and 6x zoom scope attached.

The Proninety without alternative modifications. 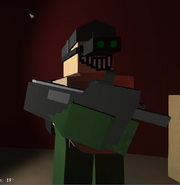 The Proninety held by a player in third person.

The P90 is a ranged weapon in Antique.