The Novuh is a rare shotgun found at police locations. It uses Buckshot and Slugs for ammunition, which can be made by crafting Shells with two Mils or two Bolts. It spawns with the Full Circle Rail attachment pre-attached by default.

The Novuh can be found in police locations. This includes police stations, wrecked police cars and several barricaded checkpoints such as in Alberton

The Novuh in the inventory.

A player wielding a Novuh. 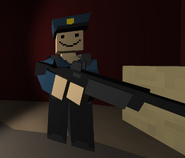 A Player holding the Novuh.
Add a photo to this gallery

Retrieved from "https://unturned.fandom.com/wiki/Novuh?oldid=186965"
Community content is available under CC-BY-SA unless otherwise noted.