The Makeshift Scope is a Scope Attachment added in the 3.9.7.0 patch. It has 6x zoom.

Crafting components are Binoculars and a single Duct Tape, as well as level one in the crafting skill. 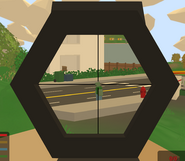 Add a photo to this gallery

The Zoomomatic is a craftable scope in Unturned, and one of the three known craftable weapon attachments. It can be crafted using 1 Binocular and 2 Duct Tape in the crafting slot.

The Zoomomatic can be used just like binoculars on weapons, or long-range sniping due to its high magnification. Although it beats the 6x Zoom Scope and 7x Zoom Scope, it does not feature a reticle, making it somewhat difficult to snipe with it.

Using a tactical laser may help to counter this problem. However, the laser is hard to see from far distances while aiming. This makes its high magnification a problem since the laser will not appear when looking at far distances.

It has a magnification of somewhere between the 12x Zoom Scope and the 7x Zoom Scope. 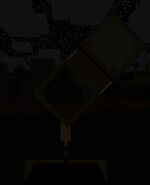 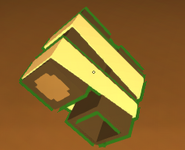 The Zoomomatic bug in a Lever action, as you can see, the zoomomatic shows a blue screen and you can't see the ammo capacity (on the top of the right corner)
Add a photo to this gallery
Retrieved from "https://unturned.fandom.com/wiki/Makeshift_Scope?oldid=206913"
Community content is available under CC-BY-SA unless otherwise noted.