A Leather Bottom is a craftable article of clothing which can be crafted by obtaining Leather which can be done by killing Deer or other wild animals.

Animal Pants is one of the two currently craftable clothing in the game, alongside its top counterpart, the Animal Shirt. It's created with 3 Animal Pelts and 1 Rope. 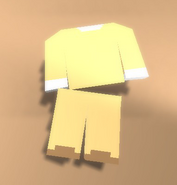 Animal and Pants on ground

Animal and Pants equipped
Add a photo to this gallery
Retrieved from "https://unturned.fandom.com/wiki/Leather_Bottom?oldid=218554"
Community content is available under CC-BY-SA unless otherwise noted.