Kuwait is a curated survival map in Unturned 3, released on May 14th, 2021. The environment is based on the country of Kuwait. The map can be download on the Workshop here. You can also watch the official trailer here.

The map has 5 bundles that can be purchased to support the creators; Divine Duneman Bundle, Letterman Bundle, Sunrise Bundle, Sunset Bundle and Assorted Hats Bundle.

There are eighteen location nodes on the map.

Only high tier vehicles can be locked, (ex. Police cars, Military vehicles, Buses) Boats require no battery and use no fuel, and can stamina for a speed boost. Boats spawn along the coast of the mainland.

All calibers are low-caliber unless otherwise specified. 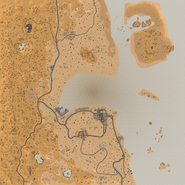 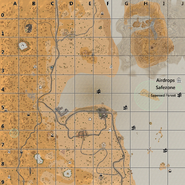 Map GPS, with overlays (As it appears in-game) 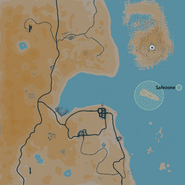