Ireland was a Timed Curated survival map in Unturned 3 released on April 28, 2018. The environment was based on the entire island of Ireland.

Three NPC factions are featured on the map: the Coalition, the Irish Defense Force, and the Irish Freedom Republic.

The creators can be supported by purchasing the Ireland Map Bundle, which has contents themed around the map. The map was originally planned to be moved to the workshop on May 25, 2018, but was extended to June 15, 2018.

Ireland contains 3 Deadzone Nodes: Moneypoint Power Plant, unlisted waste dump cave between Woodrow Farm and Tralee, and an unlisted drifting ice station in the south-west corner of the map. Aberham Anti-Air Line was a deadzone in the pre-25/7/21 version of the map, but the deadzone node was removed in the update, seemingly being replaced with the drifting ice station.

On June 25th, 2021 the Ireland team, in collaboration with russian modder "Зефирка", released an update porting the map to Unity 2017.x, and adding additional content. The team still considers the map a WIP, but wanted to let players experience what they have so far. 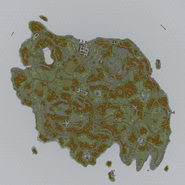 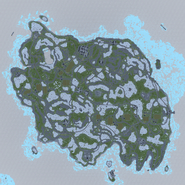 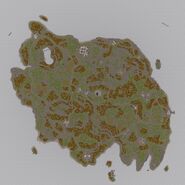 There are twenty-seven location nodes on the map.

This location is a Military zone. A Mega Zombie can spawn here. You can find high tier military loot in this location.

A town. This is where you find the circuit board required to complete Defragging. You find this the Hardware Store.

A city with both IFR and Coalition presence. You can find a note to complete the Up to the Frontlines quest in the Coalition base here.

A Harbour. You find the first crate in the Supply Line quest here.

A massive city. This is where you can find the note to complete Monthly Check-Up.

The Irish Defense Force is stationed here. This is where you can do the IDF questline.

This is considered to be a military base, due to its massive size. Irish Military Vehicles can spawn here, including an APC.

The Coalition is stationed here. This is a Safezone Node

A construction location. This is where you find the second crate to complete the Supply line quest.

This was a Nuclear Power Plant that experienced a meltdown for some unknown reason. This is the main Deadzone of Ireland.

A Mega Zombie can spawn here.

An asylum with a network of underground tunnels and laboratory.

The Irish Freedom Republic is stationed here. This is a Safezone Node.

A typical farm. Nearby is an unlisted military checkpoint, and an unlisted deadzone.
Community content is available under CC-BY-SA unless otherwise noted.
Advertisement