Hawaii was a curated survival map in Unturned 3 released on February 18, 2017, and was retired to the Steam workshop on May 31, 2019 in the 3.30.2.0 update. The environment is based on the Island of Hawaii, with a multitude of smaller islands surrounding the two main landmasses. Many underwater and cave locations exist on Hawaii. As of now, it is only available on the Steam Workshop.

The creators can be supported by purchasing the Hawaii Map Mystery Box, which has contents themed around the map.

Hawaii's downfall began sometime after the virus spread to Washington.

Aegis came to Hawaii under the guise of a simple pharmaceutical company, although they ultimately overthrew the military with fleets of frigates, and set their operating base inside Mauna Kea. The local coastguard and the remnants of the military created a survivor group known as The Unyielding.

Although Aegis was hoping to use spotted mushrooms to create a form of vaccination, they were ultimately destroyed by the Magma Zombie Boss.

There are twenty-seven location nodes on the map.

Aheahe Farm is a farm located in the northeastern section of the lower major island.

Four patches of farmland are divided into plots, with dirt paths passing by all of them. The shortest path has a shed at the end, and the largest path has a crashed Sandpiper. At the northwestern side of Aheahe Farm there is a large house, a windmill, three barns, and a silo connected to the largest barn. A Gas Tank spawns on the opposite side of the largest barn.

Civilian spawn-group loot spawns inside the large house, and Farm spawn-group items spawn everywhere else. Quads can spawn around the area, and a Sandpiper can spawn in front of the silo.

The Alika Base is the coastguard's coastal base.

It is an enclosed area located along the northeastern coast, featuring several barracks, towers, a crane, a hangar, a helipad, a ship repair bay, and the coastguard headquarters itself.

Items that can be found consist of loot from the Civilian spawn-group and Washington_Military_America spawn-group. The Coaster and Bouncer can spawn on the helipad, while the Coastguard Seaplane can spawn in the hangar. A Commander, Skipper or War Machine can spawn in the ship repair bay, the Hovercraft can spawn outside the repair bay or in the waters outside the plane hangar, and desert military vehicles, excluding aircraft, can spawn throughout the main area. Two Mega Zombies can be found here.

The Ano Resort is based upon the southeastern side of the lower major island.

It features a single large cabin alongside several smaller cabins and tents. The northern side of Ano Resort has tables surrounding a fire pit.

The Aolani Farm is a farm located a steep hill in the northeastern section of the lower major island. It is south of Hookeai Raceway.

The area notably consists of two plots of farmland, two barns, and a two-story home. Two grain silos are on the southernmost side of the land.

Civilian spawn-group loot spawns inside the two-story house, and Farm spawn-group items spawn everywhere else. A Quad may spawn between the two barns.

Aouli Harbor is a harbor located upon the upper eastern coast of the lower major island.

It primarily features a large wooden dock with two levels. There are two Gas Tanks, on opposite ends of the wooden dock.

Loot from the Washington_Construction spawn-group spawns all over the area.

Hani Farm is a farm along the southeastern side of the lower major island, bordered by a mountain.

It features two silos, a windmill, a house, a barn, and a wheat field.

Quads may spawn in the area, and loot primarily consists of items from the Farm spawn-group. The house additionally contains Civilian US spawn-group and Mechanic spawn-group loot.

To the east, off the coast, there is a dock.

Holokai Harbor is primarily a large metal harbor located upon the western coast of the upper major island. A substation extends off of a wooden pier that is connected to the main harbor.

Two parking lots are located atop the most mainland portion of the harbor, and a Gas Tank is between the two parking lots. Several mobile homes span the area.

There is a cargo ship is docked at the harbor, with wooden pallets on the right side of the harbor laid across it for use as a walkway.

The Hookeai Raceway is a racetrack in the northeastern corner of the lower half of the two major islands.

The Junkyard is located east of Holokai Harbor, atop a rocky cliff. There is a natural rock overhang over a small portion of the debris.

Debris is scattered across the location in piles, with the occasional waste management object. A nonfunctional car crusher is near the center of the Junkyard.

Although most of the Junkyard has navigation generated for Zombies, The stone wall under the natural rock overhang can be destroyed as a method of entering the major cave system under Mauna Kea.

During the Lost Camera! quest a camera can be found laying in debris.

Scavengers may spawn here along with Skid Loaders, Bulldozers and Cement Trucks.

Kahuna Gas is located on the main highway connecting the two major islands' roadways together.

At the location there is a Gas building and a Fastfood building. Four Gas Pumps are located under a covered area, with a Gas Tank near the back stone walls.

Kini Power is a power station located inland at the northeastern section of the upper major island.

It features many industrial objects, factories, and large vents. The area primarily spawns items from the Washington_Construction spawn-group.

Mauna Kea is a dormant shield volcano in the center of the upper major island.

Nearby there is a military base and an observatory. The volcano itself is a Deadzone Node.

A Mega Zombie could be found near the volcano.

The Memorial is a location based on the USS Arizona, a Pennsylvania-class battleship.

Nothing spawns at the location.

Tadaaki Light features a lighthouse alongside a house and detached garage.

It is located at the lower half half of the two major islands, upon the northeastern peninsula north of Hookeai Raceway.

The Akoni is a cruise liner located in the southwestern area of the map.

The Ailani is located in the northeastern corner of the map.

It features The Ailani as a military destroyer, and then a second vessel that collided with it. There are no ladders on the sides of the ships to climb on from.

Underwater, there is a substation with biohazard containers scattered nearby.

Waiola is located at the southwestern corner of the lower major island.

It is a camp atop a mountain meant for hang gliding. There are several small buildings scattered around the area. 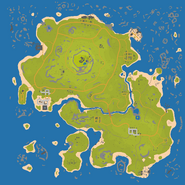 The current chart view of Hawaii, without text. 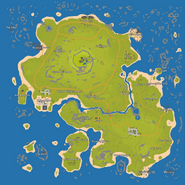 The current chart view of Hawaii, with text. 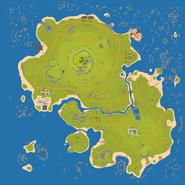 A previous chart view of Hawaii, without text. 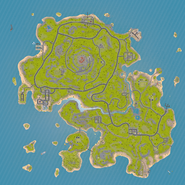 The current satellite view of Hawaii.

Viewing Memorial from an angle.
Community content is available under CC-BY-SA unless otherwise noted.
Advertisement