France is a curated survival map in Unturned 3, released on November 23, 2018. The environment is based on France.

The map was created by Ethan "Vilespring" Lossner, Jerry "SluggedCascade", Maciej "Renaxon" Maziarz, and Sam "paper_walls84" Clerke. Special thanks were given to Mitch "Sketches" Wheaton.

On January 24th, 2020 the map was moved to the Workshop, and can be downloaded Here

Following the fall of Germany, France began blowing up tunnels leading to Germany in an attempt to slow down the infected. Unfortunately, their efforts were futile, as an infected soldier somehow made its way into Paris, and started an outbreak in the city.

Meanwhile, a group known as RULA began development on high-tech experimental weaponry in a remote underground facility, developing several experimental weapons for use against the infected. Their research and development was ordered by the French government, being provided funding to develop some form of weapon effective at eliminating infected. These weapons included the Focus Weapons, such as the Focus Rifle and Focus Prototype, and the Flamethrower. However, all of the facility's lower floors below the top floor were flooded at some point due to some sort of collapse or explosion. The reactor room in the facility contains a note, reading "Something tells me their plan B didn't involve flooding the facility", which suggests that the flooding of the bunker was caused by some kind of human error.

On February 23, at 1211 hours (12:11 pm), a plane crashed at Orly International, spewing out a large amount of infected. The military was dispatched to take care of the infected, successfully stopping the infection at the airport in under 7 minutes. At 1218 hours (12:18 pm), investigation units were dispatched within 15 minutes at 1233 hours (12:33 pm). While fighting the infected, a soldier fighting the infection at Orly International was bitten by one of the infected, and was sent to the hospital in Paris. The soldier complained that he was bitten and possibly infected with the virus, though everyone ignored him and said he was just paranoid.

Later in the day at 1730 hours (5:30 pm), the President of France released an emergency broadcast, stating that the Greater Paris region had fallen to the infected, and that anyone seeking refuge from the infection should head to the fortified Marseille stronghold or Verdun Airbase. The following day, France authorized the usage of flamethrowers to combat the infected. These flamethrowers were created by RULA, which had different behavioral properties from a traditional flamethrower. The military thus began using the flamethrowers made by RULA to defend refugees from the infected. Some time after the outbreak, the infected broke through the defenses at Verdun Airbase, causing Verdun to fall.

The Marseille Stronghold was the other refuge location in the broadcast, which was the only remaining refuge location at this point. At some point, a militia group made a plan to sabotage the Marseille stronghold. They created a so-called "dirty bomb", which upon detonation, caused the area around it to become irradiated, turning it into a Deadzone Node. After the detonation by the unknown terrorist group, Marseille was evacuated by a small group of soldiers, escaping on a Maelstrom boat, picking up civilians along the way to the fort. The bomb that was detonated most likely was transported on the train which is currently located at Marseille, which can be concluded due to the blast marks and scattered debris around one of the train cars. The note that details their plan can be found at Gare 17.

Flamanville Power was also turned into a Deadzone Node due to the infection. Being a nuclear power plant, it had to be protected to ensure the safety of the surrounding areas. Due to this, some of the military went to Flamanville Power Plant to stand guard to prevent any infected from causing the reactor to explode or meltdown. Due to the infected coming in small amounts, the soldiers standing guard let their guard down, not expecting much. This would prove to be disastrous, as when a large group of infected came through, the guards were unprepared and were overwhelmed. In an attempt of desperation to ensure the safety of surrounding areas, they attempted to shut down the reactor. Unfortunately, the infected broke through, leaving the plant operators defenseless. Everyone at the plant became infected, and with no person to complete the shutdown, the reactor had a meltdown, causing the area around it to become a deadzone.

The Bay of Biscay is located off the western coast of France. While the immediate area around the map node holds nothing of interest, a Safezone Node is located on the island to the south.

A small pile of underwater wreckage can be found to the north of the bay.

Flamanville Power is a nuclear power plant located along the western coast, with a military checkpoint. Directly to the east is Orly International. The location is a deadzone.

Due to being a deadzone, the location requires a Gasmask or Biohazard Hood to safely enter the area. The location was irradiated due to a meltdown of the reactor at the power plant. The player can enter a network of tunnels from the reactor building. The tunnels spawn high-tier military-grade loot. Both tunnels lead into a room with two tunnels behind Large Fans, these two tunnels lead into the Ocean and can have High-Tier Military Loot, the Player must crawl to enter them. The tunnels can also lead to Areas within the Cooling Towers witch also contain Military Loot.

Military vehicles will commonly spawn at the military checkpoint.

Gare 17 appears as a converted farm that serves as a militia location. A storyline note regarding the downfall of Marseille can be found on a desk.

The Insurgent can spawn here.

The beautiful city of Paris is the capital and largest city in France. It contains multiple buildings and landmarks.

There is a military checkpoint where a mega zombie can spawn, a police fortification at the Louvre, along with ranger loot, and a small ranger spawn group on the Eiffel Tower.

Le Mans Hospital is a listed located, just west of Paris. This location has a high amount of medical loot, making it have somewhat higher player traffic.

There is a small amount of Police loot spawns around the watchtower, and one military loot spawn, located behind a wall. Be careful here, as this location has a high zombie population.

Located at the main enterance road to the airport are a few statues, with no context unfortunately. The terminal is made up of 2 stories, both with a small road access to them branching from the entrance road.

Upon entering the airport terminals, there is a single security checkpoint, which beyond the checkpoint leads to the rest of the airport. Two hangars can be found outside next to the runway, as well as an air traffic control tower, a military tent, and a medical tent.

Furthermore, a helipad can be found at the south end of the runway, which may hint at a helicopter vehicle spawn.

Pont du Gard is an ancient Roman aqueduct bridge monument, located at the southeast part of the map.

The location by itself does not have any kind of item or vehicle spawns. It is a reference to a real-life monument of the same name and appearance.

It is connected to an island that does have a boat spawn as well as every kind of berry bush, in addition to Civilian and Farmer spawns.

The construction site is an unlisted location found on the south side of the map, on the main highway leading away from Paris.

Normal Engineer loot spawns can be found at this location, as well as a few weapons. There are a few construction zombies that can spawn here, with the addition of a chance for construction vehicles to spawn.

The Train Station is an unmarked location located just at the West road entry to Paris.

The Derailed Train is an unmarked location north-East of Marseille. It can be found along the unobstructed rail path.

This location can spawn Construction Loot, good for gathering materials. It has a medium population of zombies.

A single Militia/Ranger loot spawn is present here, including some other loot spawns, which is most likely engineer/construction loot.

The RULA Facility is an unlisted location just south of the Marseille deadzone. It is an expansive underground tunnel system, which can be accessed by an open hatch on an empty island.

When going to this location, be sure to have a Flashlight, Tactical Light, Military Nightvision, or Headlamp with you, as the bunker is a Dark Node.

This location includes focus weaponry, flamethrowers and high-tier ranger loot. However, these are rare to find and only spawn in certain spots. If you are looking for these, It is recommended that you bring a Diving Tank and Snorkel. Bringing a wetsuit is not recommended for lots of loot gathering, but can be used for more breathing time.

This is the only location that the Focus Weapons can spawn at on the map, and in the game. To obtain these rare weapons, a Snorkel and Diving Tank are required, due to the distance needing to be traveled to get to the focus spawns being quite substantial. Without the diving items, you will drown before you get to the room.

This is an unlisted island, just near Cotentin Arsenal.

This location has Militia Zombies, and spawns Ranger Grade Loot.

The lighthouse is an unlisted location just east of Pont du Gard.

This location can also spawn zombies, as well as basic civilian loot.

Jourdan's Fort is an unlisted safezone, which is the only safezone in the map.

This area is only accessible by Sea or Air.

If you wish to safely go here via Air travel, try building a structure from the sea floor, and build up until you make a landing pad/runway.

The sunken French supply ship is an unlisted location off the west coast of France.

This area is only accessible by Sea or Air but when there you will have to dive. The area has no hostile mobs and is just an area to get some loot. PS. Those WW2 Tanks aren't drivable.

The Tunnel Checkpoints are unmarked locations located in the north and south-most part of the map, spawning decent loot.

The North Tunnel Collapse is a Military Location, with a small popultation of Military Zombies.

The South Tunnel is a Police Location, with a small population of Police Zombies. This location is a perfect location to visit after spawning in or early game, as it is a police spawn close to respawn locations.

This unmarked area is a Military Location just east of Paris. It can be accessed via the Mountain Road leading out of Paris from the East. It has a medium population of Military Zombies.

This location is the border of France and Germany, further supported by the fact that there is a German and French flag at the collapsed tunnel.

This is also the only place in the map where Germany Military items can be obtained. The German Military loot table can be found at the green tent, which stands out from the pale blue color. Some of the obtainable items Exclusive to this location are:

The Verdun Airbase is a large military location that was used to protect survivors from the infected.

Military loot and vehicles spawn throughout the location, and medical and civilian loot spawns in one of the hangars. A note can be found that provides insight into the lore behind the Flamethrower. A Mega Zombie may spawn here. 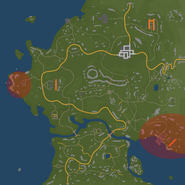 The reactor at Flamanville Power

The hatch to enter the RULA Facility.

A note found at the non-flooded office table at RULA Facility. It appears to be a explanation why RULA stopped responding. 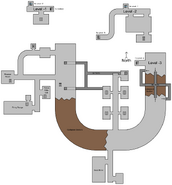 Approximate map of the flooded and unflooded RULA facility.
Add a photo to this gallery
Retrieved from "https://unturned.fandom.com/wiki/France?oldid=226926"
Community content is available under CC-BY-SA unless otherwise noted.