The Fire Axe is a Common Melee Weapon Unturned 3. It has a slow swing speed, long reach, can cause bleeding, and takes up 6 slots (2x3) in the Inventory.

The Fire Axe can be found in Fire Stations and as a rare drop from Firefighter Zombies.

As well as being an effective melee weapon, it is very efficient at chopping down trees. The Fire Axe's power attack consumes 10 Stamina and inflicts 1.5 times as much damage as a regular attack.

Hitting with the Fire Axe. 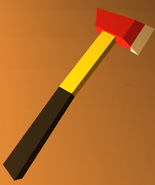 The Fire Axe as seen in the Inventory description (3.0).

Player holding a Fire Axe and wearing a Firefighter Helmet on Unturned 3. 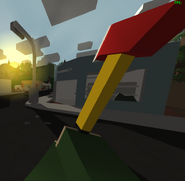 The inventory icon.
Community content is available under CC-BY-SA unless otherwise noted.
Advertisement