Easter Island is a curated survival map in Unturned 3, released on February 7th, 2020. The environment is based on Easter Island. The map can be downloaded on the Workshop Here.

There are twelve location nodes on the map.

There are also seventeen unlisted locations on the map.

It is an active volcano covering the north area of the island, with visible lava rivers and many cracks filled with lava pools. It also has a large Vermillin Research Centre close to the top, with catwalks crossing over lava rivers and leading to the caldera. An additional underground bunker is connected to the surface base via an elevator and a cave system further underground. Entering the surface base is dangerous due to the abundance of Burner Zombies (and Acid Zombies to a lesser extent) that lurk throughout.

All of the volcano's slopes are almost entirely barren and full of ash, save for abundance of Chartreuse Berry bushes. There are also wrecked vehicles and buildings, evidently destroyed by an eruption concurring just before the zombie outbreak.

A Mega Zombie may spawn in the car park of the surface base or one of the rooms in the underground base. A fire-breathing one may also spawn on the catwalks.

Vehicles that spawn at the surface base are Urals, Military Offroaders and other kinds in Vermillin livery. A Pelican can also sometimes spawn on the Helipad near the top of the Volcano.

Hanga Roa is a Medium-Sized town located in the West of the map, the location is divided into 3 parts, The Suburbs, the "Ring", and the Boardwalk. Unlike most towns in Unturned, the location doesn't make use of "Road Line" objects and instead opts to use the "Road Nodes" system in order to make a more interesting and "loose" town. To the north of the town, a playground can be found.

The location is home to a Gun Store, Apothecary Store, Bisto, Hardware Store, Fire Station, Police Station, Grocer, Diner, Park, Fishing Store, Burger Store and a Suvinour Shop, seven houses can also be found here. Most buildings present (Except the Gun Store, Hardware Store and Bisto) are custom objects, giving the town a more unique look compared to other towns in Unturned of a similar size.

A Water Reserve is present at the location, A well can be found on the South Edge of the town, and a Water Tower can be seen North East of the town.

A Forest also borders the town to the East, being far more dense on average than the rest of the map. Animals such as Horses and Boars can also spawn there.

Due to being the only town on the map, and a location most players will encounter early on, it's not uncommon to run into one or two other players here. Shoot-outs are also common, and it may be worth avoiding the location entirely unless the player is properly prepared to deal with another player.

This location contains two "Sub Areas", thus two sections will be dedicated to it. It is displayed on the map as "Rano Raraku Harbor"

A boulder-like structure situated in the Extinct Cauldera of Rano Raraku. It is populated mostly by Moai Zombies and Metal Nodes. A large amount of Moai are present at this location, as this is the very Quarry they were constructed at. The Eastern Flank of the hill is covered in Moai, all facing towards the centre of the island.

A water reserve is present at the location, with not only a dirty source of water but also a toilet, which water can be collected from.

The location is pretty dangerous, due to the Moai Zombies taking more hits than regular zombies, and due to the locations "Central" nature, being in between a number of loot Hotspots and Base Locations. It's not unlikely that the player might run into another player while at this location.

Prior to version 1.1, a Mega Zombie can also be found at this location, spawning in the centre of the Quarry, making the location rather even more dangerous than it already would have been.

The "Main" sub-location. Rano Raraku Harbor is a Harbor situated in the North-East of the map, just south of the Abandoned Weather Station, and North of Poike Resort. The location has a Vermillin Research Centre on the docks, that appears to be researching local plant life. The Harbor is also home to a docked Cargo Ship, which has a crashed Pelican on the Helipad. Like most Harbors, there are a large number of Containers present at the location.

A Mega Zombie can spawn at this location, spawning on the docked Cargo ship. Making the Cargo ship very dangerous to enter without proper-preparation.

The location is also dangerous in general, due to being a high-population location, with many players visiting.

Typical Vermillin vehicles can be found at this location (Military Offroader, Ural, Van, Tarantula), rarely a Rhinoceros or Pelican may spawn.

A small Vermillin Outpost, located to the central-East of the map. This, along with Hanga Roa and Mataveri Airport are common location for a newly spawned player to visit. It is characterised by the grave of King Hotu Matu'a, the abundance of Moai, the surrounding terrain wall, and the small Vermillin Outpost.

The location can spawn typical Vermillin loot, and isn't too dangerous of a location for the player to visit, as most players won't revisit this location unless they are newly spawned.

A few Vermillin vehicles can also be found at this location. (Military Offroader, Ural, Van, Tarantula)

A small airport located in the centre of the map, it, alongside Hanga Roa and Akahanga Burial Grounds is a common first location for new players. The location consists of two Plane Hangers and a small extended facility. Unlike most airports in Unturned, the Control Tower is directly connected to the waiting area. A Post office is also present at the location, next to the waiting area. The waiting area has a number of smaller businesses, giving the Airport more loot than a typical airport.

Prior to version 1.1, the airport was significantly harder to enter, due to there being few broken fences.

The location is relatively safe, despite being in the centre of the map. The most a player may encounter are other poorly equipped players.

The location can spawn a lot of vehicles, typical Civilian vehicles can be found in the Parking Lot, while Luggage Cars, Sandpipers and Albatross can be found spawning on the runway.

The Sunken Ship is a submerged pirate shipwreck surrounded by a large amount of Coral located in the North-West of the map.

The location can spawn a large amount of Pirate loot, such as Harpoon Guns, Flintlocks, Daggers, Sabres, and their respective ammunition.

The location will require that the Diving skill is maxed out, even then it's recommended to bring additional oxygen supplementary items, such as Diving Tanks, Snorkels, Wetsuit Top, Wetsuit Bottom or Algae. The player will also need to bring along light providing items, such as a Flashlight, Tactical Light, Headlamp, Flares, Civilian Nightvision or Military Nightvision. A Pirate Key is also needed in order to fully loot the location properly, due to a Pirate Chest being present, however, one can be found in the hull of the ship.

A map of the Vermillin bunker under Terevaka. 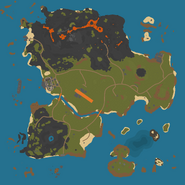