Easter eggs are little hidden features in Unturned for the sake of comic relief. They are usually a reference or hidden locations containing references, but can be just a random secret.

The Cheese's description is "Fills you with determination!", a reference to Undertale, a game made by Toby Fox. It's old description used to be "Ready to be applied with crackers".

The Beret is a rare article of clothing in Unturned found mostly at military locations. The Beret's description of "Bill's" is a reference to William "Bill" Overbeck from the Left 4 Dead series, whose signature characteristic is his green Army beret.

The Rainbow Bowtie's description is "Bowties are cool, rainbow bowties are even cooler!", which is the 11th Doctors catchphrase in the British tv-show, Doctor Who.

The Earbuds' description is "TF2 represent!", a reference to popular cosmetic item of the same name in the first-person shooter Team Fortress 2 along with a parody of the original description.

The "No Violin" easter egg returns from Unturned Classic and a message written in blood says "No Violin". It can be found written under the top floor in the Barn near Kluane Lake.

Several graffiti can be found in the subway of St. Petersburg, Russia.

There are several hidden inukshuk around the PEI map and in Yukon map. Inukshuk are mostly used for navigation as a marker, although because of the developer Nelson Sexton's sense of humour, these are placed randomly around the map to be found by the players.

Near the Golf Course, there is a crashed UFO that spawns the Shadowstalker and Rails. There is also a Digger that uncovered the crash. Hazmat Zombies spawn around the UFO and Digger.

The Soulcrystal Easter Egg appears at the end of the subway tunnel of St. Petersburg. Typing "Anastasia" in Area chat, at night, will open the secret door, if you are near the Soulcrystal symbol.

Killing twenty zombies near the Soulcrystal will teleport any Players in the room to a laboratory, containing notes crucial to the Storyline.

The Soulcrystal may be a reference to the Half-Life series.

A dryer appears in a random location in every official Unturned map, with a substantial amount of rubble. There's a Steam background of this.

The Inukshuk inside the suspended shipping crate above the S.S. Haven.

The Epic face on the Radio tower of unturned antique.

"нельсон" Easter Egg found in the St. Petersburg on the Russia map.

"SK8r" Easter Egg found in the St. Petersburg on the Russia map.

"Illumunati" Easter Egg found in the St. Petersburg on the Russia map.

"Zombie Head" Easter Egg found in the St. Petersburg on the Russia map.

Tally mark At subway
Add a photo to this gallery

Easter eggs are little hidden features in Unturned for the sake of comic relief. They are usually a reference or hidden locations containing references, but can be just a random secret.

The Confederation Bridge is a mixed-type location in Unturned. It is located near O'Leary Military Base and Alberton. It contains the hidden message "Death is mad...", located underneath the bridge, where the first rocky support is surrounded by water. This message is a reference to the wiki's only admin: DeathIsMad.

The Wooden Support is a crafting material, which is crafted with 2 sticks. Its description reads: "Sturdy board support. Very support. Much use", which is the structural syntax applied to text when speaking in the ways of the Doge meme.

The Crowbar is a common weapon found in locations related to the operation and reparation of vehicles. The Crowbar's description reads: "Fordon Greeman's favorite weapon", which is a reference to Half-Life's main protagonist, Gordon Freeman, whose signature weapon is the crowbar.

The first letters of the first and last names were likely switched to avoid copyright issues.

The Beret is an uncommon headgear piece found at military locations. The Beret's description of "Bill's" is a reference to William "Bill" Overbeck from the Left 4 Dead series, whose signature characteristic is his green Army beret.

The farm sign on the road from Alberton to Charlottetown says "Lirik's Waffle Farm", which is a reference to LordLirik and GiantWaffle, two popular twitch.tv streamers, who made their base in the barn.

The Chef Hat is an uncommon headgear found at Civilian Locations.The Chef Hat's description, "Chef's trademark pillow hat. Beware of rats.", is a reference to the Pixar movie "Ratatouille."

The town added to the game in version 2.1.4 is a reference to the town "Woodbury" in the TV series and Comic Book "The Walking Dead".

On the road leading out of Alberton, to the north, there's a billboard that states "Bananas! $44.99!".  This is in reference to the current banana shortage, as the whole world receives their bananas from Central America, due to Tropical Race 4, also known as Panama Disease.[1]

The description of the Magick Cloak, which reads "Check for scars." is a reference to the Harry Potter franchise, where the main protagonist, Harry Potter, is a wizard with a scar as an identifying mark.

Enter the white house at the far left (as seen from the road connected to the main road) in Charlottetown. If you look up, you will see the words "No Violin" written in blood.

The blocked up house in Montague has "Danger" written in blood on the top floor. The same writing can be found on the main menu Humvee.

There are several things in Unturned that can not be found in the game without the use of third party programs. 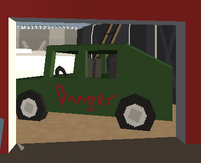 The Humvee with the "Danger" blood writing in the main menu.

The "Danger" blood writing on the wall of the blocked-up house in Montague. 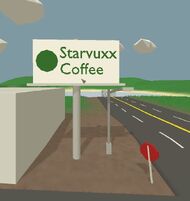 "Starvuxx Coffee" referencing the Youtube 'Let's Player' Vuxxy and his love of coffee.
Add a photo to this gallery

Retrieved from "https://unturned.fandom.com/wiki/Easter_Eggs?oldid=218658"
Community content is available under CC-BY-SA unless otherwise noted.