Washington: The Eaglefire can be found in civilian locations of Washington. It has a greater chance to spawn in gun stores, and civilian zombies rarely drop it.

Russia: It can be found in the American Spy Base and in a Carepackage.

Hawaii: It can be found in the Alika Base and civillian locations.

Germany: It can be found inside a Carepackage

The Eaglefire cannot be found naturally on Yukon and PEI.

The Eaglefire can be repaired using 4 Scrap Metal and a Blowtorch.

Old model of the Eaglefire

Eaglefire with no sight equipped

The difference between the Eaglefire and the old Honeybadger model. 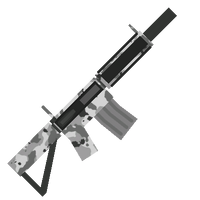 Arctic skin for the Eaglefire
Add a photo to this gallery
Retrieved from "https://unturned.fandom.com/wiki/Eaglefire?oldid=220923"
Community content is available under CC-BY-SA unless otherwise noted.