The Daypack is a Common Backpack in Unturned 3. When equipped, it gives the Player an additional 28 storage, similar to the Dufflebag.

Daypacks are found at Civilian Locations.

The list below shows all colors of Daypacks along with their respetive ID.

The Schoolbag was an uncommon backpack found in civilian locations, such as towns. When equipped, it replaced any other backpack that was being used and provided 12 inventory slots and up to 10 kg carrying capacity, making it a good starter bag for beginners.

The Schoolbag was yellow and brown, with a carrying strap. It was not recommended for PvP, as its bright color could easily attract attention. 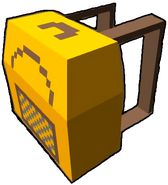