Charlottetown is a town in Unturned. It is located on PEI, Festive PEI, Halloween PEI and PEI Arena.

Charlottetown is a middle sized city located near the coast, which contains 12 buildings. It has 3 houses, a police station, fire station, pharmacy, gas station, mechanic, grocer, post office, hardware store, and diner. A water tower can also be found next to the grocer.

The town contains various types of civilian, police, medical and fire loot. The police station can hold powerful firearms such as, the Bluntforce or Cobra. The gas station/mechanic can contain gas cans, blowtorches, and other repair items. The diner, gas station and grocer all contain food items. The pharmacy can contain medical items such as Medkits and Splints. The fire station can contain Fire Axes or flares. Low tier weapons and clothing can be found in the houses, and water can be gathered from the tower next to the grocer.

Charlottetown (AKA Beta Town) is a town in Prince Edward Island. It is a medium-sized town which is close to Kensington Campground and Fernwood Farm. It is filled with a large amount of zombies which include civil servant zombies and civilian zombies.

Charlottetown has a variety of buildings of different types, including the Fire Station, Police Station a Pharmacy, a Cafe, a food store as well as a series of homes.

Charlottetown only has four houses, unlike most towns which has more than six. Most spots in these buildings usually spawn common to uncommon civilian items such as cloth, buckshot and Colt. The fridges in some houses spawn food and drinks.

There are two civil service buildings; the fire station and the police station. The fire station is notable for being able to spawn fire axes and handlamps, as well as spawning the rare fire truck in the hangar.

The police station is known for spawning powerful firearms such as the Novuh. It is also a good source of civilian bullets for civilian or police grade magazines. A police car may spawn next to the building.

A pharmacy can be located next to the two story house. Apart from the police station which spawns bandages, it is the only building in the town which spawn a variety of medical items, useful for players in need of health or sickness reduction.

A diner is located near the post office, while a food store is found behind the pharmacy. Both spawn a variety of food and drinks, as well as a chance of spawning weak melee weapons or uncommon clothing. This makes it useful for players to lower their hunger and thirst bar.

The post office and the store spawns crafting materials, tools and melee weapons. Generators and worklights are spawned only in these type of places.

The mechanic and gas store spawns items related to vehicles (such as car jacks), but sometimes crafting materials.

Charlottetown. Some places are highlighted 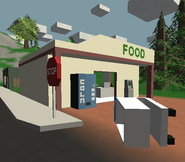 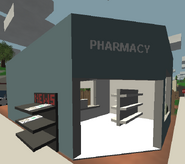 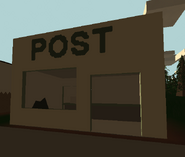 The (construction) store
Community content is available under CC-BY-SA unless otherwise noted.
Advertisement