The Chainsaw is an Uncommon Melee Weapon in Unturned 3 that can only be found in Farms or rarely dropped by Lumberjack or Farmer Zombies. It has a medium reach and can be used constantly, without any form of fuel.

As well as being an effective melee weapon, it allows players to chop down trees for logs efficiently by dealing a lot of resource damage.

A Chainsaw on the grass. 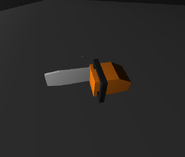 A Chainsaw on the road.

A player holding a Chainsaw.