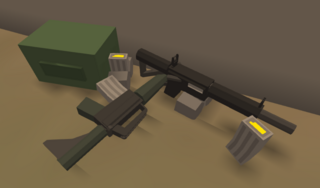 Ranged weapons are a context type in Unturned 3. They represent one of the two general weapon types, the other being melee weapons, and are projectile-based. Ranged weapons are capable of dealing damage over significant distances, and have a multitude of varying statistics.

Similar to most other context types, ranged weapons are affected by quality. After a certain point in degradation, their bullet spread will eventually begin to increase while their damage decreases. 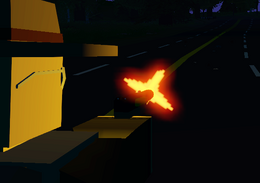 Ranged weapons have a lot more statistics than other items. Aside from the normal statistics on most items, and on weaponry generally, there's several specific to ranged weapons. Most statistical data is directly from the .dat files.

There are four different fire modes in Unturned 3: safety, semi, burst, and auto.

RPS is an abbreviation of "rounds per second." It is the output of the calculations made with the firerate value in a ranged weapon's dat file.

With the use of specific magazine attachments, the following may also bypass invulnerability:

Below is all the current Unturned ranged weaponry are placed along with some basic stats. Visit each guns page for more information about it.

Ranged weapons are effective at taking enemies quickly and from a distance. To do so they need a Magazine Attachment to function, and each weapon uses a different kind. Some ranged weapons have several types of ammunition such as a shotgun, which can fire buckshot(12 widespread low damage pellets) or slugs(single high-damage bullet). Ranged weapons can also have attachments added to them, in the form of sights, tacticals, grips, and barrels.

The damage is the base value used by the game - however, the damage might be reduced by the type of the target or other factors like the players clothing or skills. For more details how to calculate damage, refer to this page: Damage.

The rarity of each weapon is listed by an abbreviated code, as listed in the following table.

Shotguns have varying damage depending on which shotgun is being used and how many pellets hit per shot. A buckshot holds 12 pellets, so it can deal from 16% to 240% damage with one buckshot round; a slug round compacts all that power into a single projectile. All shotgun damage is being calculated using buckshot in the table.