Bayonet is a rare tactical attachment found in militia locations. Pushing the Interact key ('F' by default) will cause the player to swing with the Bayonet.

The Bayonet is found in 7 locations, which are mostly mixed with civilian locations. These locations are; the S.S Haven, the compound in Holman Island, Kensington Campground, the militia box in the barricaded house in Montague, the air traffic control tower in Belfast Airport, the town and the lighthouse in Summerside Peninsula, and very rarely at the Gun Store in Burywood, these are all militia locations. 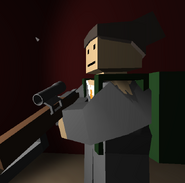 A player welding a Mosen with a Bayonet affixed to it.

The in-game description of the Bayonet.

A Bayonet affixed to a Zubeknakov.

A Bayonet affixed to a Compound Bow.

Two bayonets.
Add a photo to this gallery

Retrieved from "https://unturned.fandom.com/wiki/Bayonet?oldid=43907"
Community content is available under CC-BY-SA unless otherwise noted.