The Avenger is a Rare Ranged Weapon in Unturned 3. It classifies as a Military-grade handgun. It uses the Avenger Magazine by default, which holds up to 13 rounds. The gun takes up 4 slots in the Inventory (2x2).

Hawaii: It can spawn at Alika Base and other Military Locations.

PEI: It can spawn at Summerside Military Base and Confederation Bridge.

Germany: It can spawn in the Coalition Base, Schwarzwald Military Base, Aerospace Defense Complex and other military areas.

The Berette is a Ranged Weapon found at police locations. It uses Lebel Magazines

The Berette is currently known to be found in 5 locations in Prince Edward Island. The locations it is found in are:

The M9 is a Ranged Weapon in Antique. It uses 9x19mm rounds. It holds 13 rounds, and has damage similar to that of the G17.

The M9 is commonly found at Police Stations, Farway Airport's air traffic control tower and crashed plane, Ana's Lighthouse, and the Evacuation Zone. It can also be dropped from police zombies.

Avenger equipped in the hand

A Berette on the ground. 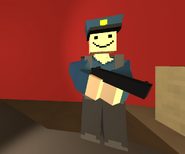 A berette held by a player.
Polski
Community content is available under CC-BY-SA unless otherwise noted.
Advertisement