The Alicepack is an Epic Backpack in Unturned 3. When equipped, it gives the Player an additional 56 slots (8x7).

The Alicepack provides the highest amount of inventory slots of any Backpack in the game.

Germany: It can be obtained rarely at Military Locations as a part of the Special spawn-group.

PEI: It can be found at Summerside Military Base, Confederation Bridge or as a Mega Zombie drop.

Russia: It can be found at Silo 22 and the Oil Rig.

Washington: It can be found at Olympia Military Base, Seattle, and at Military Checkpoints.

Yukon: Kill the Mega Zombie at either Off Limits, Crashed Skycrane or at the Overturned Ship.

Belgium: It can be found at Military Locations and Nulirane Research Centre dropped by a Mega Zombie.

France: It can be found at the Marseille and Flamanville Power Deadzone Nodes, as well as more rarely at Verdun Airbase. It can also be found as a Mega Zombie drop. (Replaced by France variant.)

Easter Island: Kill a Mega Zombie at any major Vermillin location. It can also be found in Airdrops.

The Alice Pack can be found only in Military Locations. 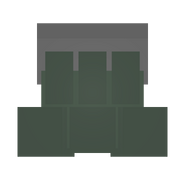 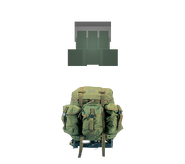 The Alicepack compared to a real-life counterpart.

Player wearing Alicepack.
Add a photo to this gallery

Inventory view of the Alice Pack
Add a photo to this gallery
Retrieved from "https://unturned.fandom.com/wiki/Alicepack?oldid=226217"
Community content is available under CC-BY-SA unless otherwise noted.