The APC is an amphibious military Legendary Car in Unturned 3. Unlike most land-based vehicles, the APC can be driven on both land and water.

There are currently five variants of the APC: forest, desert, Vodnik, olive and France.

All variants are a near-fully enclosed vehicle with a long hull, with two narrow front window slits in the front for the front passengers. Hatches on the roof of the vehicle cannot be opened.

The forest and desert variants are eight-wheeled vehicles with two hatches on the roof of the APC. They are named the Forest APC and Desert APC respectively.

The Vodnik variant is only a four-wheeled vehicle with a single roof hatch, and has a front bumper. Additionally, the Vodnik variant has a a front rear window on each side. It is named the APC in-game.

The olive variant is based on the standard eight-wheeled vehicle, and is olive in color. In-game, it is named the APC.

Germany: The olive variant can be found at Military Locations.

Hawaii: The Desert APC can be rarely found at Mauna Kea and Alika Base.

PEI: The Forest APC can be found in the Summerside Military Base, or near the Confederation Bridge.

Russia: The Vodnik variant can be found at Military Locations.

Washington: The Desert APC can be found in military locations: including the checkpoints near tunnels, and Olympia Military Base.

Belgium: The Woodlands APC can be found at military locations such as Florennes Military Base. 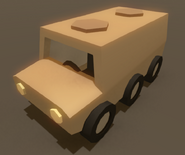 The Vodnik variant of the APC.

FranceGermany
Add a photo to this gallery

Add a photo to this gallery
Retrieved from "https://unturned.fandom.com/wiki/APC?oldid=228020"
Community content is available under CC-BY-SA unless otherwise noted.