The 6x Scope is an Epic Sight Attachment in Unturned 3. It can be found attached to the Phantom by default.

The 6x Zoom Scope is an uncommon sight attachment found at military locations and militia locations. It can also be found pre-attached to the Crossbow. 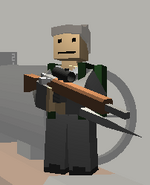 A player welding a Mosen with a 6x Zoom Scope attached to it.

Viewing through the 6x Zoom Scope.
Add a photo to this gallery
Retrieved from "https://unturned.fandom.com/wiki/6x_Scope?oldid=221583"
Community content is available under CC-BY-SA unless otherwise noted.